We Should Remember Them by Jean Calder 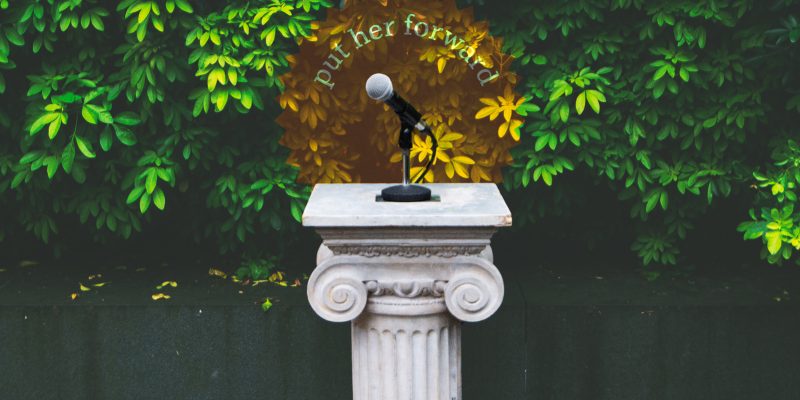 As we’ve travelled England meeting women and hearing their nominations for put her forward, we’ve also been having conversations about inspiring local historical women.

And that’s how we came across Jean, who is at this very moment leading a campaign to get a statue of Mary Clarke erected in her home city of Brighton.

As part of her campaign Jean has written this incredible article which shares many of the foundations for put her forward, about representation of women and other historical women that have gone fairly unrecognised.

It’s with Jean’s kind permission that we are able to include it in our own blog below:

We Should Remember Them

In 1914, on the eve of world war, the Suffragette leader Emmeline Pankhurst wrote in her autobiography,  My Own Story :

“The militancy of men, through all the centuries, has drenched the world with blood, and for these deeds of horror and destruction men have been rewarded with monuments, with great songs and epics. The militancy of women has harmed no human life save the lives of those who fought the battle of righteousness. Time alone will reveal what reward will be allotted to the women.”

Pankhurst lived long enough to see Parliament ‘reward’ a limited number of women with the vote. However, one hundred years on, women may have equal rights in law, but in practice there is little  equality. As to the “monuments” these are few and far between.

I recently wrote an obituary for local pensioners’ activist Isla Robertson and in the process, confirmed what I had suspected – that only a tiny proportion of obituaries commemorate women. When I asked a journalist on a national newspaper the reason, she replied that “loads more” male obituaries are submitted.

Few obituaries and histories are written about women and it’s the same with other memorials, whether blue plaques or statues. There are historic reasons for the absence of memorials to early female lives, but that does not explain why prominent women of the twentieth century are so neglected. Nor does it explain why contemporary women are so tentative in commemorating them.

To mark the centenary of women achieving the vote, local feminists, led by the historian Elizabeth Dwiar, are crowdfunding to have a blue plaque near the Clock Tower to mark the place where the office of the Women’s Social and Political Union (WSPU) was based. This is a worthy initiative and I fully support it. However, it is commemorates an organisation, rather than any of the leading suffragists who lived or worked in Brighton & Hove and whose names are all but forgotten. These women changed the world and should be commemorated as individuals.

Brighton and Hove may have a statue each of Queen Victoria, but there are none of other women. There has been no reluctance to recognise prominent men in this way. Over the past 35 years, the city has placed a statue of music hall star Max Miller in the Pavilion Gardens and another of athlete Steve Ovett on the seafront. Yet it has no statue nor any other permanent memorial to female reformers who changed history.

Probably the most obvious omission, is any kind of memorial to Dame Millicent Fawcett, who from 1897 led the National Union of Women’s Suffrage Societies (NUWSS), by far the largest suffrage organisation. She lived, worked and lectured in Brighton from 1865 – 1874 alongside her husband Henry Fawcett, who was MP for Brighton.

There is no permanent memorial to the pioneering early women doctors, most of them suffragists, such as Dr Louise Martindale, who founded local clinics and hospitals. Nor for suffragist Margaret Bondfield, who worked here and later became Labour’s first women MP and the first female cabinet member and Privy Counsellor.  Nor for Minnie Turner, of the WSPU, who ran a boarding house in Victoria Road, where suffragettes came to recuperate from force-feeding in prison.

There is none for American-born Elizabeth Robins, a renowned actor and writer, who introduced the works of Ibsen to a British audience and lived and died at Brighton’s 24 Montpelier Crescent. On the Executive of the WSPU, she wrote several influential suffrage-related plays and books, including The Convert in 1907.

The name of Sybil Haig, later Viscountess Rhondda, who was born in Norfolk Square and grew up in Adelaide Crescent, is largely forgotten. She, her sister Lottie who was born in Hove and daughter Margaret, were active members of the NUWSS and the WSPU. All three went to prison and though Sybil rejected violence, her daughter bombed a post box, then when imprisoned, went on hunger strike. Sybil’s niece Cecelia Haig was one of two suffragettes who died as result of police beatings on 18th November 1910, the day the suffragists called Black Friday.

Perhaps most shameful of all, there is no memorial for Mary Clarke, Emmeline Pankhurst’s sister, once the WSPU organiser for Brighton. She died in 1910, almost certainly as a result of harsh treatment and force-feeding in prison. Her death never received the publicity of Emily Wilding Davison’s violent end under the Kings’ horse on Derby Day 1913. Nonetheless, Mary Clarke’s obituary rightly called her the “first woman martyr who has gone to death for this cause.”

These and many others deserve the honour of a statue in our city – one that records the names of these heroic women. Commemoration is long overdue.